Red Bull, let's talk about Red Bull. Most people enjoy the beverage, some with booze, others straight up - some I'm sure intravenously when possible; when cracked-open in public and others notice, you'll sometimes hear people muttering under their breath "I heard that stuff causes heart attacks" - This isn't Four Loko! "They say it makes your kidneys expand and secrete something". It gives you wings, and helps to restore alertness when drowsy - at least that's what it's sold as.

But then... Then they do really cool interesting things with all the money they charge for those little silver cans of heaven. Sebastian Vettel's Formula 1 Race Car below, Red Bull is only the fourth team in history to claim 3 consecutive championship titles in a row; 2010, 2011 and 2012. That's no small feat! 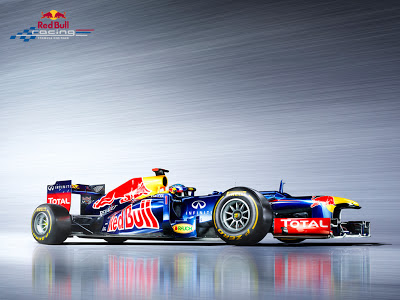 So tell me again, why does an Energy Drink have a Formula 1 team?
They also made that strange video at the top of this post, the "Athlete Machine" - which is actually a fantastic take on the work of Goldberg, this is an intellectual move, there's substance in these acts.

This past October you surely did not miss Felix Baumgartner's Super-Sonic Freefall from 128,100 feet, space.

Why does Red Bull keep doing these extravagant boundary destroying events? In everything from Crashed Ice to the back-flipping helicopter, their imagination knows no limits. While everyone may not agree with the premise of the drink, it's hard to refute the efficacy of their marketing and branding campaigns. Their prowess is unmatched in the industry, they're first, second and third, everyone else is just a minor spec - save for Ken Block with Monster and DC Shoes.

These are today's masters of viral internet marketing, these are the trend setters. Be inspired - get out there and push on a boundary, would you!