For most people, ok, for everyone, its not even 2012 yet. However, the automobile manufacturers work in the future. Kind of like time travelers, but not with any of the really strange physics stuff.  The Nissan  GT-R - R35 was first sold in the US in July 2008 as a 2009 model.  The 2012 Nissan GT-R was just released, and as good as the 2009 car was, the 2012 is even better.  More power, better suspension, better tires, updated front bumper, rear diffuser and more.  0-60 times have gone down into the 2 second range, putting the 2012 Nissan GT-R squarely in the sites of many much more expensive cars, like the Bugatti Veyron Super Sport, and Porsche Turbo S in this Road and Track magazine article. 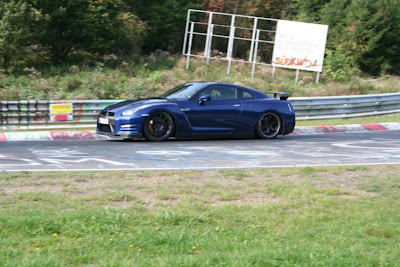 The future is testing now, and soon at Nurburgring.  There have been some minor revisions for 2013. There might possibly be a new tire, carbon fiber trunk, carbon fiber wing, and some more power.  Rumors have talked of either an "Evo" or a SpecR version.  The Lexus LF-A and now the Dodge Viper ACR have been knocking seconds off their Nurburgring lap times.  The 2012 went 7:24 in partially wet conditions, will the 2013 have enough to take 12 seconds off that time?  The next test is mid-October, but we probably will not hear any results until the Tokyo Auto Show.