The Stigs' opinion of GTRs

on May 08, 2011
A long time fan of Top Gear [UK] and the Stig, I've often wondered what such a professional driver might think of our cars. Well now we know for sure! A forum member (gcatz) in London, England ran into the Stig at one of the BBC studios and got a little souvenir for us all. 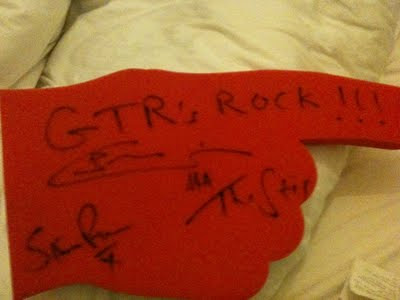 "I was at the recording of a new Al Murray show called "Compete for the meat" which I think airs later this month (UK), my friends had a team on the show so we got to sit just behind the guest celebs, one of which was the stig (Ben Collins) another was Tim Lovejoy. It was actually my fiancee who managed to grab him, asked for an autograph and told him what car we had so he wrote that. The foam hand its on is an aspect of the Al Murray game show which you use when somebody gets sent off" -gcatz gtr.co.uk
Here's a classic clip of Clarkson testing the JUN R33.