on February 20, 2011
A while back I came across this RB25 engine and transmission for sale on eBay. It piqued my interest, as I have always been a bit of a drag race guy.  I think that automatics are the quickest way from A-B on the dragstrip, up to a certain point.

Since 1992 I have had a GMC Typhoon and since ~ 1998 had a GMC Syclone, which are both all wheel drive V-6 turbo trucks.  The Typhoon being the SUV, and the Syclone being the pickup. The automatic transmission works out OK in the trucks, although I think I have been through about seven of them.


Another motivation was these videos from Australia, of an 8 second R32 GT-R. RB30 powered, automatic, off a transbrake.  Everyone needs a trans brake.

So the RB25 came with this automatic trans, transfer case, an oil pan that looks nearly exactly the same as an RB26 pan, and I have always liked the response of an RB25. I do make fun of them a bit, but the couple I have tuned, I have really liked. The variable cam timing on the inlet side seems to help out a lot with the low end on the 25. 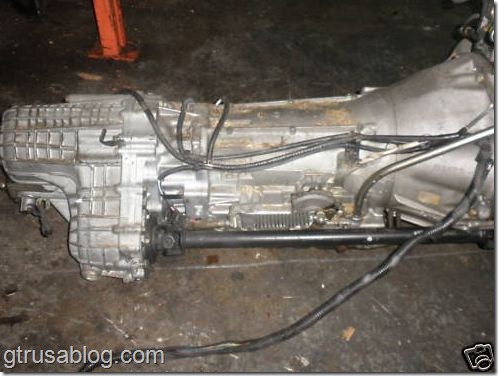 Eventually I might stick it in something. For now it is nice garage decoration.For the $1000 delivered I paid, I don't think I can go wrong.