on January 12, 2011
Every time it rained while I was driving, I noticed the water flow would be smooth over the car until it hit the wiper arm, then it would divert all the way around it, where as on the other side with no rear wiper arm, the water was flowing smoothly over the trunk lid. So, for the following reasons I decided to remove the entire rear wiper.

While doing this you need to be very careful, there is a risk that if you slip using a wrench or something, you can shatter the rear windscreen, which won't be very easy to replace.
Procedure...
It's pretty easy to do this procedure, following these steps carefully:

Remove the 3 screws inside the trunk that hold a black plastic cover over the rear wiper motor assembly. Then, unplug the 2 wire connectors and remove the plastic cap covering the wiper arm assembly on the outside. Remove the nut that's holding down the wiper arm. Oddly enough you have to unscrew the wiper arm by twirling it around, and it comes off in 5 revolutions. 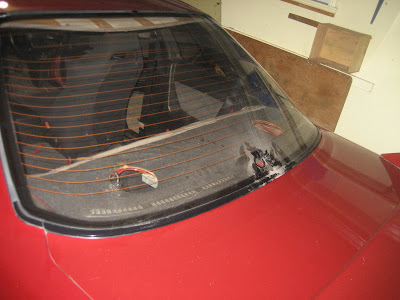 Now comes the hard part, and this is where I realized how the glass gets broken. There's a nut sandwiching things together to not allow water in, and that nut is usually seized and rusty, it's a 22 mm nut if you'rs isn't rust ridden, but my Dremel made some very quick work of that whole situation. I Cut down the center of the nut on each side, and popped it off, which then allowed the whole wiper motor assembly to just fall out the bottom and into the trunk. Using a 12 mm socket you can remove the rear spray nozzle and plug the hose. 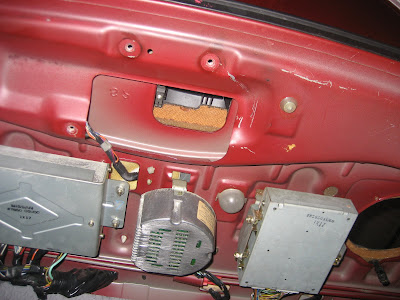 Now you need to plug the large hole in the rear windscreen and the small nozzle hole as well. For the nozzle hole, you can use a simple nut and bolt, then glue a plastic bolt cap on top to make it look clean. 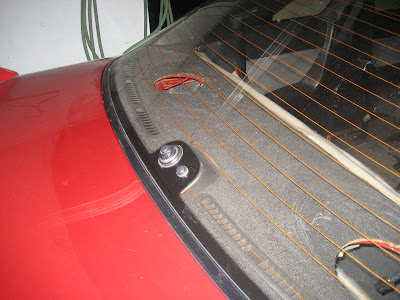 As for the larger hole, I used a combination of varying sized washers, one longer nut and a bolt. Which sandwiched a couple of round rubber gaskets between the washers, and a larger plastic cap on the bolt head to give it a clean looking finish. I also used silicone gasket maker on the glass surface to separate the metal washers from the glass, that way if the metal ever rusts, the rust won't put pressure on the windscreen and cause a crack. You'll also need to be careful when tightening the hole thing together, too little torque and you'll have a water leak in the rain, but too much torque and you'll shatter the glass. 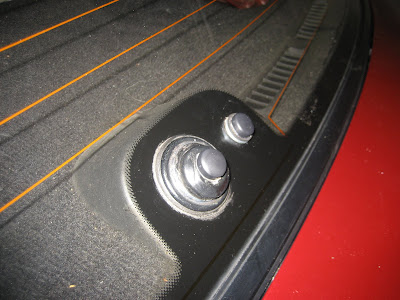 How To Rear Wiper Delete