on June 06, 2011
It often gets very heated between drivers competing for world class status in the FIA GT1 Race Series, Yesterday (June 5) at Silverstone Raceway the driver of the GTR (Richard Westbrook) and DB9 (Stefan Mücke) got into it on the track, resulting in a sorry end for one of the drivers. 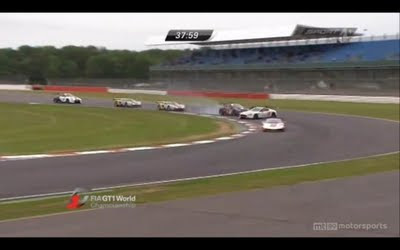 It begins with the DB9 being rear swiped and sent spinning off the track by the #22 Nissan GTR. From the in-car shots it really doesn't look like Westbrook did it on purpose, the DB9 recovers quickly and immediately catches up to the GTR again, when he tries to pass Stefan clips the GTR and sends both cars spinning off the track, this time into the wall, putting an end to his race. In racing, Revenge is not always the best strategy, and often leads to regretful outcomes.

The Series is debating disqualifying the driver for his act of revenge by suspending his License.