The whole World Challenge R34 GT-R idea, came from a chance meeting, and a set of circumstances that put several people together at the right place at the right time. The Fujitsubo car was here in the US. It had been mentioned on a couple message boards, as an exotic car dealer in San Diego - Symbolic Motor Car Company had imported it. In December 2004, during a Super GT exhibition race that was held at California Speedway, Igor and myself noticed this R34 GT-R. The event was being sanctioned by SCCA Pro, so the tech guys from World Challenge were available.

We went over to the R34 to check it out, and talked with the SCCA guys about running the car in the series. They were open to it, so before I knew it, we were talking to Symbolic, and buying the car.


Not wanting to screw anything up, we started communicating with
some friends from Nissan and Nismo. Igor is fluent in English, Russian, and Japanese, and managed to make a few friends. 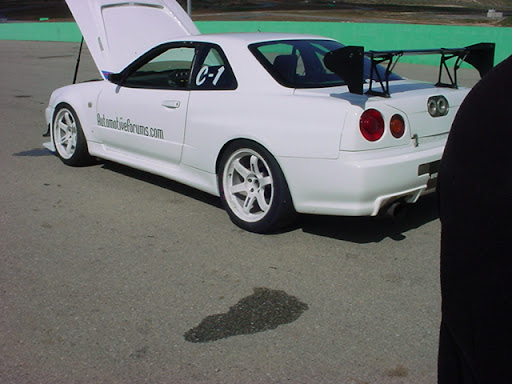 Our contact at Nissan suggested we bring Tetsuo Suzuki from Shift to the US to help us out with the car. Suzuki is the crew chief for Shift. Shift built and raced the Falken GT-R's in Super Taikyu, and also built and maintained the R34 GT-R's that ran at Nurburgring. You can't argue with knowledge like that, so we were happy to have him come over.

The first track day at Willow Springs, was just a shake down, get a little bit familiar with the car day.    After the track day, Suzuki showed us how to tear down and rebuild a Getrag transmission.  That all became a little moot later, as we ended up with a Holinger sequential transmission.